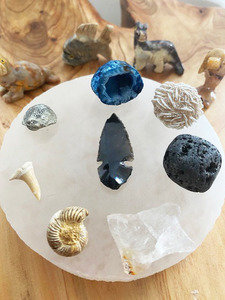 READ ABOUT CRYSTALS BELOW.

Stone of Scotland and St Andrews. A powerful balancer. Enhances perception. Cleanses the aura & awakens creativity. Used in healing to treat intestinal disorders and ailments of the eyes, ears, nose and throat.

Lava Stone, (also known as Basalt, or Lava Rock) is an igneous volcanic rock.  It has solidified from molten lava, after conditions of intense heat and pressure. It gives us strength and courage, allowing us stability through times of change. A calming stone, it is very useful in dissipating anger.  It promotes positive changes where needed in behavioural issues.

Found in the ocean these stones contain fossils of shells. Alleviates pain within the joints and skeletal system. Eases pressure within the joints, allowing a greater range of movement. Also helps with deformities of the bones, and heals broken bones.

These ancient marine molluscs were similar to the modern squid, octopus and nautiloids. They were creatures of the open tropical seas and are now abundant in lime stones from tropical reefs. These were perhaps the most agile and intelligent of the invertebrate carnivores, living in ocean waters of all depths.

The characteristic spiral was formed by partitions or chambers of the coiled shell where they lived. Once the ammonite grew too large for its living chamber, it formed a new one and moved into it. The empty chambers filled with gas to assist buoyancy at different depths in the oceans.

Ammonites became extinct at the end of the Cretaceous Period some 65 million years ago after a 330 million year existence on earth.

Place in your home to bring wealth, health, vitality and happiness or at work to promote beneficial business dealings.

Otodus is an extinct mackerel shark which lived during the Paleocene and Eocene epochs, approximately 60 to 45 million years ago. It is estimated that this shark commonly reached lengths approaching 30 feet. Fossil teeth of Otodus are common fossils in Morocco where they are collected as a by product of phosphate mining operations.